As we reel from the horrific news out of Charleston, SC, in which nine people were killed and others wounded after a gunman opened fire during Bible study at Emanuel AME Church, the details we’re gathering in the aftermath all suggest that this was a hate crime. According to eye-witnesses, the shooter was lobbing accusations and generalizations about Black people and declared that what he was about to do (i.e. kill innocent worshipers) was necessary.

I wish I could help non-Black folks understand what it’s like to be inundated with stories and experiences like this. It scars the psyche. You go from anger and indignation to depression and dejection and back and forth and back again until you’re inevitably numb. When news of Kalief Browder’s suicide broke, many of my White friends expressed their anger about it and the system that facilitated it. I told them they could be angry all they wanted. As for me, I’m exhausted.

White allies, I thank you for your thoughtfulness in this regard. Now allow me to be your stopwatch; Time’s up.

A colleague of mine summed it up perfectly on Facebook today: 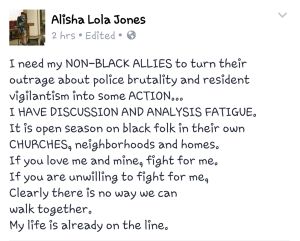 At this point, I’m not interested in your listening. I think the danger in this listening posture is, while it seems like the mindful and conscientious thing to do, it can also be far too convenient. It’s a great way of doing nothing. For the sake of finding the right action, you take no action instead. We have had the benefit of years — centuries, literally — of thought, narrative, scholarship, literature, film, fiction, non-fiction, and discussion to help us all understand these issues. We’re the most connected and information-overloaded that human beings have ever been. We can transmit entire books to our hand-held devices. Class has been in session. The school bell as now rung.

Many of you have been on it for some time now, working in solidarity with people of color. You have been in the trenches from the beginning (or your beginning). I don’t discount you, but I also caution you to not be self-congratulatory. You’ve left some folks behind, folks who call themselves “allies.”

I have a love-hate relationship with that word, ally. I find too often it’s a self-appellation, and one that is often unearned. We should apply the same rule to it as we do to nicknames. You can’t give yourself a nickname; other people give it to you. To give it to yourself comes off as pretentious. It’s the same with self-proclaimed “allies.” I know you mean well, but what about your life demonstrates that you walk in solidarity with others who experience life differently from you because of their skin color, legal status, or sexual orientation? Please don’t call yourself my ally if your uncle’s racist jokes go unchecked in your presence. Please don’t call yourself my ally if you say something insensitive, I call you on it, and all you can do is brush it off and say, “Girl, but you know I love my Black people!” Don’t do it.

I love my colleague Laura Cheifetz’ vineyard laborer analogy on Ecclesio today. Whether you got in the game early or late, it’s important to simply get in the game at all. But, if I may use an idiom that we often say in reference to the product of the vine, “It’s five o’clock somewhere.” Some of us are long overdue for our break, while others have yet to clock in.

Your shift is upon you. Kindly report to work.

99 Replies to ““Allies,” the Time For Your Silence Has Expired”