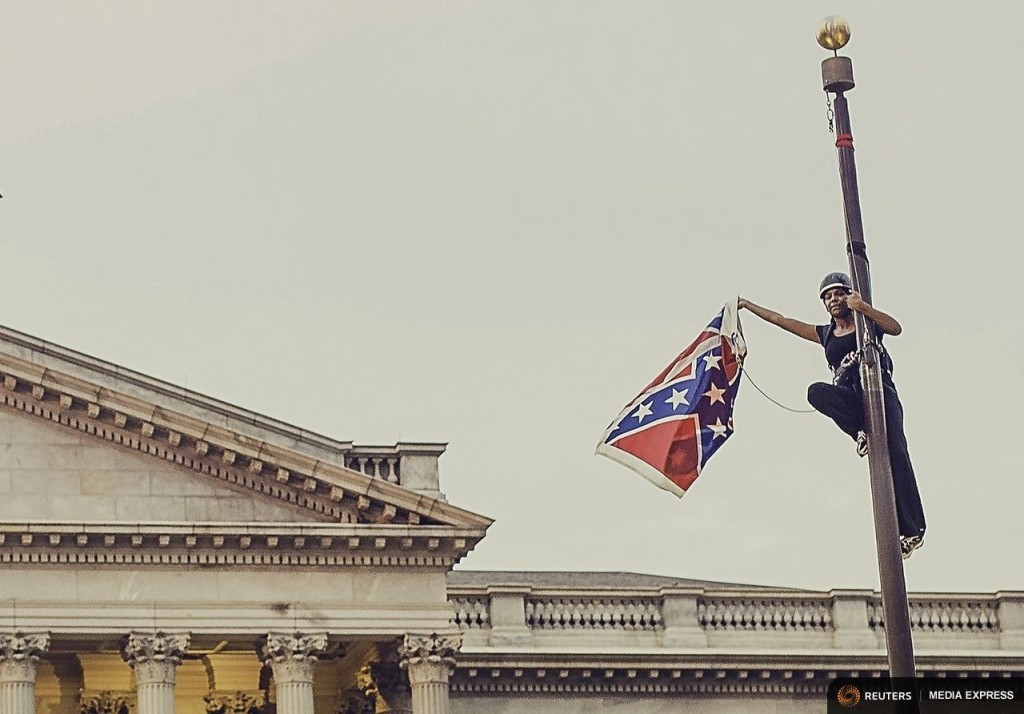 Some weeks the sermon thesis and text come fairly easily and early in the week. Sometimes they take a bit longer. Sometimes you think you’ll preach on one thing, then something happens (like the massacre of 9 people in a church) that makes you crumple up what you had and start anew. Then there are some sermons that literally do not come until Saturday, mere hours before you have to preach it. Yesterday’s was such a sermon.

My soul was waiting for Bree Newsome, though I didn’t know it.

If you didn’t catch wind of the news, Bree is now famous for using a harness to scale the 30-foot pole from which a confederate flag flies over the grounds of the South Carolina Statehouse. As she scaled the pole, touched the flag’s hem, and snatched it from its connectors, she could be heard echoing David’s words to Goliath, saying to those below waiting to apprehend her, “You come against me with hatred, oppression and violence, but I come against you in the name of the Lord!”

Like many preachers, I use a lectionary — the Revised Common Lectionary, to be exact. I once balked at the idea of being beholden to a set of readings every week, but I later found using a lectionary to be a powerful discipline. Also, I’ve seen week in and week out God’s providence in that the scheduled readings always seem to have some temporal truth to speak to power. The thirteenth Sunday in Ordinary Time for Year B was no exception, and darned if the unnamed woman with a hemorrhage didn’t give us what we needed to unpack Sister Newsome’s prophetic protest.

Her reaching for that piece of cloth, for me, invoked the image of not just the physical gesture of the woman in this week’s pericope, but her longing as well. Like that woman, black folks are bleeding out. Our blood is being spilled in churches and on the streets by police bullets. Our communities are hemorrhaging as men, women, and youths are funneled into prisons that make money off of them. We feel that bleeding. Bree felt that bleeding and thought if she just reached out with a small gesture, God would meet her and her community at its place of need. And I imagine that she, like the woman with the hemorrhage, was surprised by the power drawn out by such a seemingly small gesture.

In Mark 5:34, Jesus reassured this woman, who was now panicking because did something she socially had no business doing — she was “out of order” — that her “faith” made her well. The Greek word for “faith” in this text is πίστις (pistis), which can also be translated as “faithfulness.” We’re not just talking about a passive belief that one privately holds unbeknownst to anyone else, but an active movement toward what one believes to be so. “Pistis” in the sense of “faithfulness” means that your money is where your mouth is. It means you’ll do something, you’ll work for something you believe in, and you’ll do it consistently, tirelessly — faithfully. What we saw in the civil rights movement of the middle of last century was pistis. What we saw in Bree’s tiring climb up that pole is pistis. It’s belief alongside action and dogged determination. May we all embody that same relentless pistis in the work that is still before us.

Black churches are being burned left and right after the massacre in Charleston. Shamefully wide disparities in wealth between Blacks and White persist. Black women are three times more likely and Black men are six times more likely to go to prison than their white counterparts. We will undoubtedly hear of yet another unarmed Black body perishing with impunity for her or his killer too soon from now. But somehow in Bree’s reaching, in her pistis, we felt in our body that we were healed — if only for a moment.

One Reply to ““Your Faith Has Made You Well”: #BreeNewsome and Bleeding Out”