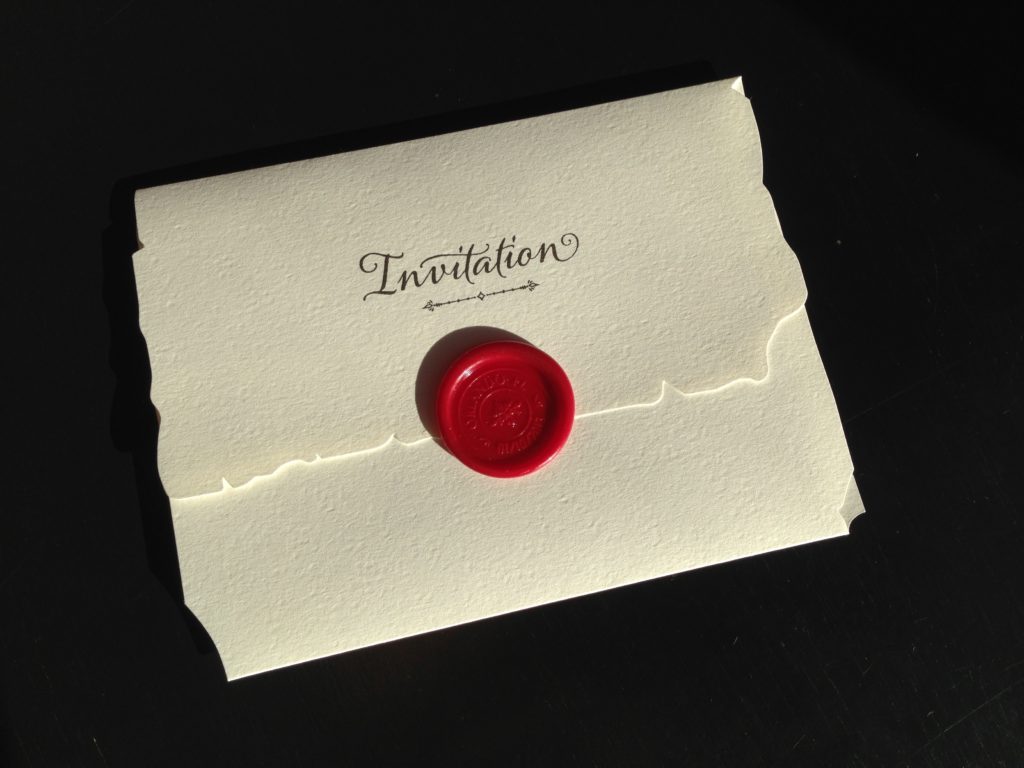 While at General Assembly, I was blessed to participate in a panel luncheon hosted by Covenant Network of Presbyterians. The theme of the luncheon was “Toward a Truly Inclusive Church.” In my portion of the discussion, I offered an illustration that one of the attendees encouraged me to share on my blog. So, I share it with you now!

Imagine that you are in a grocery store doing some shopping and you run into someone you know. This is someone you respect and like and who you’d probably call a “friend.” In his shopping cart, he has all manner of steaks, ribs, burgers, hot dogs, buns, and condiments, more than one family can eat in a single sitting. It’s clear he’s preparing for a big gathering. You remark about the contents of his cart and he says, “Yeah, I’m having a cookout tomorrow. Oh wait, you can come if you want!”

Now, what if, when he first started planning the cookout weeks ago, this friend had called you personally and invited you to his cookout? What if he had asked then if you had any dietary restrictions that might impact his shopping list? What if he’d had you in mind from the beginning?

When it comes to being an inclusive church (or any other institution), there is a difference between “you can come,” and “you’re invited!”

Often, we want people to come join with us in what we’re already doing. We have in mind what we want or how we expect a thing to look. Except, including others and sharing voice with others automatically changes how the thing will look. If you invite a vegan to your cookout, you might have to try a new recipe, which likely requires you to step out of your comfort zone. But you do so because not only is their presence important to you, but so is their participation. It is the same with the church that seeks to be inclusive. We must be mindful of the ways in which we extend our invitation. Switching metaphors now, how can we move from asking people to board the bus we’re already on and instead work together to figure out which is the bus we should be taking?

Since that luncheon, I’ve been thinking about passive vs. active invitation and inclusion. Who has been an afterthought to me? I hope that before every, er, “cookout” we plan, we ask this very important question. I don’t expect us to get this right every time. I certainly won’t. But it’s a habit we must form if inclusion is truly important to us. 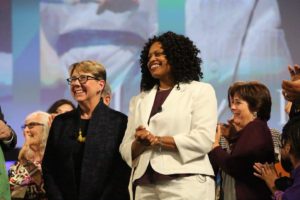 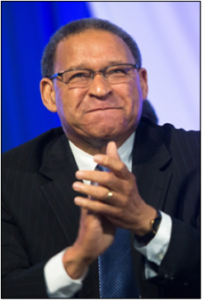 And so did this! 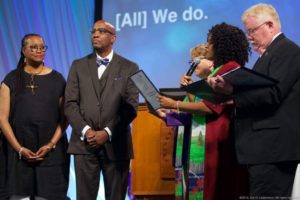 Over the past week, I and my colleague Jan have had the honor, privilege, and responsibility of serving our denomination as the Co-moderators of the 222nd General Assembly. We have ushered our assembly (and been fabulously supported by staff) into some thoughtful and often difficult proceedings. And throughout the assembly, I’ve been deeply impressed by our members’ graciousness and resolve. When the hour got late and the questions got confusing or frustrating, we made a point to remind everyone that we’re going to be alright.

And we were. In fact, I think we’re better than alright. These faithful people tackled issues such as fossil fuel divestment, the merits (or not) of BDS in the Israel-Palestine conflict, organizational restructuring, and repentence for our role in oppression and violence with such grace, class, and love. Even those who didn’t get their way never lost their way. They stayed engaged, lovingly dissenting if they felt called to do so, and remained in the conversation and around the Table.

I come away from this assembly with more hope for the church and our denomination than I think I’ve ever had, because the 222nd General Assembly let me see anew what beloved community looks like. And for anyone who thinks young people are disconnected from our church, I’d suggest they meet our Young Adult Advisory Delegates, as well as the many young commissioners we had!

A lot of great work was done here in Portland. We’ve adopted a new confession — the Confession of Belhar — that rejects the sin of racism and division and lifts Christ’s call to the “visible unity” of the church. We elected a Stated Clerk to lead our denomination. And, while I understand that some feel some of our overtures didn’t go far enough, such as our acknowledgment of harms done to the LGBT community, I’m hopeful and confident that what was passed has set us on the right path. Wherever we landed this past week, it’s clear to me that God is not through with us, and to paraphrase our new Stated Clerk, we’re not dying, we’re being reformed.

To the commissioners, advisory delegates, volunteers, and observers of this year’s General Assembly, you have no idea how profoundly you’ve ministered to us! You have served and conintue to serve not just your denomination, but your Savior incredibly well! To the staff, I’m convinced you will never be appreciated proportionately for the work you’ve put into this, but I intend to try!

Presbyterian Church (USA), may the Lord God bless you “real good.” And, indeed, we gon’ be alright.

As I write this, it is the 11th Sunday in Ordinary Time (Year C) and I’ve just preached in part on the reading from  2 Samuel 12. David has been confronted by Nathan for his violation of Bathsheba and Uriah in the slickest of ways. The prophet tells the king a story of a cruel, thoughtless, and callous sin by a powerful person against someone with considerably less power. He paints a compelling picture of a wealthy monster who steals what little bit his poor neighbor has. Nathan then turns the canvas around and shows that he’s been painting David’s portrait.

“You are the man!” Nathan says. A moment before, David was ready to pronounce death and condemnation on the theoretical monster, until he realized the monster was him.

Early this morning, fifty lives were stolen in a well-planned act of anti-gay violence. Fifty LGBTQ children of God lost their lives because someone didn’t like the idea of them kissing in public. During Pride Month. Fifty. The worst mass shooting (not mass killing, but mass shooting) in the history of our country.

Cue the political rhetoric about Islamic extremism and how it (and, by extension, all Muslims) should be stopped. During Ramadan.

Let Christians be confounded by (or, worse, silent in the face of) such a vile act. Let the church offer prayers and sympathy, scratch its collective head and wonder how such a thing could happen, as if we don’t already know.

Forty percent of homeless youth identify as LGBT, most of whom were kicked out of their homes by families who refused to accept them, leaving them vulnerable to addiction, crime, and human trafficking. Somewhere between 30 and 40 percent of LGBT youth have attempted suicide. Much of this can be attributed to religious teaching. A pastor who counseled parents to turn their backs on their gay son, or submit their lesbian daughter to conversion therapy. Flippant comments about “sissies” thrown carelessly about from the pulpit, without regard for who they may pierce. Relegation of gay men to the choir loft (entertain us!), but kept from the Trustee board. Scapegoating same-sex couples as the purveyors of moral erosion. That’s our doing. That’s our assault weapon.

Church, we are the man!

This particular gunman took out fifty people in one night. How many LGBT sisters and brothers have we — the Church — gradually and systemically killed over a longer period of time? He and we have been in the same business. We’re simply not as efficient as he was.

This is not to suggest there can’t be a variety of theological leanings in the church. What I do suggest is that we have not experienced our differences in healthy ways. We can have hermeneutical diversity in ways that do not kill beloved children of God. We in the hetero-normative center have every advantage, comfort, and privilege available. Why, then, do we come for the sanctuaries, safe spaces, and treasures of those in the non-binary margins?

Sadly, many in our own ranks aren’t too idealistically different from this gunman. And, though he may have been a “lone wolf,” this kind of hate does not develop in a vacuum. It is nurtured. It is facilitated. It is given permission to thrive and grow. It is provided with a safe space. Church, for whom/what will we provide sanctuary? I believe God is calling us to make that decision today.

Note: It has been suggested that this post calls out any one specific denomination (namely my own), or conservatives within it. This post calls out hatefulness, which was the shooter’s ideology and, sadly, is present in all denominations and religions, right and left. We must, whatever our theological leanings, fight concertedly and fervently against such ideologies, because they do indeed kill. Then and only then will we be a distinct witness to the love of God through Jesus Christ. Additionally, I am proud of my denomination’s recent moves to live into the visible unity of the church by adopting the Belhar Confession and by acknowledging harms done to the LGBT community. We have a ways to go still, but I believe we’re on the right track!